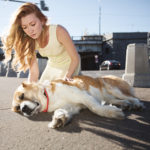 Emily, a student who took her Pet First Aid Course with ProTrainings, used her quick thinking and the skills she’d acquired with us, to help a wounded Staffie who’d been hit by a car!

Whilst travelling home from a grand Sunday lunch, Emily spotted a limping Staffordshire Bull Terrier. She pulled over and spoke to the owner, explaining she was trained in pet first aid and could help out. Luckily, she’d got the first aid kit she purchased from ProTrainings in the boot of her car.

Emily quickly assessed the dog and realised its leg was broken, so she began to calm the shaking dog before setting to work wrapping the leg in a bandage, using the box of the kit’s thermometer as a splint.

His other leg was badly bleeding; on speaking with the owner, it transpired the poor dog has been hit by a car, breaking his left leg and grazing his right as he fell over. This leg was also bandaged, to reduce the bleeding.

Once safe, Emily carefully placed him in the boot of her car, wrapped in a foil blanket, and took him to the emergency vets.

His owners were so lucky that a trained let first aider was passing, as the situation could have ended much worse. The dog (they found out later, was named Rocky) was rushed to have surgery on his leg.

In Emily’s own words, “Without your training course, I would not of known what to do in this situation, other than get the dog in the car. I just want to thank you and let you know that your course was very beneficial for me and that it also saved a little dog called Rocky who was involved in a hit and run.”

Be prepared to save a dog’s life, like Emily did with Rocky. See both online and classroom courses nationally here: www.propetfirstaid.co.uk