Ebola is a virus that is affecting thousands, mainly in Africa but reading in isolated cases further afield.  In this episode of the First Aid Show we look at the spread of this virus and what needs to be considered in preventing against infection.  Currently is is not in the UK but there is a lot of concerns over if Europe is at risk.  See our First Aid Show Video on Ebola. The First Aid Show is our video site on many medical subjects.

We have heard a great deal about the Ebola virus in the news and in this video will explain what Ebola is and how you can protect yourself from this virus.

Ebola virus is a very serious condition and is usually fatal. Currently there is no licensed treatments or vaccines.

This disease is a huge threat in Africa but for people living in countries outside Africa, it remains a very low threat. Ebola was first identified in Africa in the mid-1970s. An outbreak that began in March 2014 was the most serious so far. By October 2014 it had killed more than 4,000 people across Guinea, Liberia, Sierra Leone and Nigeria.

We could see cases of Ebola within the UK. This happens where individuals live or work in the affected countries and travel back to the UK. When they arrive in the UK they bring the virus with them. An example of this was in August 2014. A British nurse who was treating patients in Sierra Leone contracted the Ebola virus and was flown back to the UK for treatment in a London hospital. Even though this has happened, experts studying the virus believe it is very unlikely the disease will spread within the UK.

Ebola is spread by contact with the blood, body fluids or organs of an infected person. The good news is that by following infection control methods, we are able to minimise the risk of infection. It is likely that people who will contract the virus, are those who are giving care to other infected people, either by directly touching the victim’s body or by cleaning up body fluids (stools, urine or vomit) that carry infectious blood.

Ebola can survive for several days outside the body, often on the skin or the mouth of an infected person. In Africa when a person dies, it is common for mourners to touch the body of the deceased. Where that person had Ebola, it is passed on to the individual who touched the deceased person, this has helped the virus to spread. 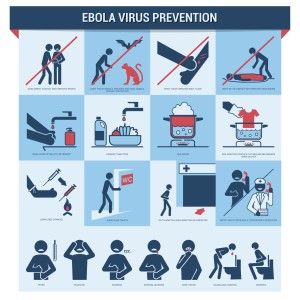 A person is infectious as long as their blood, urine, stools or secretions contain the virus. The Ebola virus is generally not spread through routine social contact, such as shaking hands with patients who have symptoms.

The virus is not, for example, as infectious as diseases like the flu, as airborne transmission is much less likely. You’d need to have close contact with the source of infection to be at risk.

So who is at risk?
Anyone who cares for an infected person or handles their blood or fluid samples is at risk of becoming infected. Hospital workers, laboratory workers and family members are at greatest risk. Strict infection control procedures should always be followed, wearing protective clothing minimises this risk and simply washing hands with soap and water can destroy the virus.

An infected persons symptoms will typically be to develop a fever, headache, joint and muscle pain, sore throat, and intense muscle weakness. These symptoms start suddenly, between 2 and 21 days after becoming infected, but usually after 5-7 days. Diarrhoea, vomiting, a rash, stomach pain and impaired kidney and liver function follow. The patient then bleeds internally, and may also bleed from the ears, eyes, nose or mouth. Ebola virus is fatal in 50-90% of cases. The sooner a person is given care, the better the chances that they will survive.

There’s currently no licensed treatment or vaccine for Ebola virus, although potential new vaccines and drug therapies are being developed and tested.

Patients need to be placed in isolation, in intensive care. Dehydration is common, so fluids may be given directly into a vein (intravenously). Blood oxygen levels and blood pressure need to be maintained at the right level and body organs supported while the patient’s body fights the disease and any other infections are treated.

There are many experimental drugs that are under development ZMapp is one of these that can be tried, although it has not yet been tested in humans for safety or effectiveness. The product is a combination of three different antibodies that bind to the protein of the Ebola virus.

Where anyone has been diagnosed with Ebola the area must be immediately quarantined and patients treated in isolation. Healthcare workers need to avoid contact with the bodily fluids of their infected patients by wearing face masks, goggles, gowns and gloves. Take extra care when handling blood, secretions and catheters and when connecting patients to a drip, disinfect non-disposable medical equipment before re-use. Ensure that you sterilise and dispose of used needles and disposable equipment carefully and properly dispose of any secretions or body waste from the patient. Always carefully and frequently wash hands with soap and water (use alcohol hand rub if soap isn’t available). 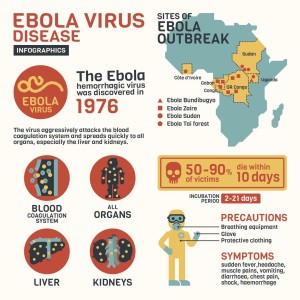 So one thing that worries people is what if they have been on a flight with someone with Ebola. Are they at risk?

You cannot catch Ebola through social contact or by travelling on a plane with someone who is infected, without direct contact with the blood or body fluids of an infected person.

Cabin crew identifying a sick passenger with suspicion of infectious disease on board, as well as ground staff receiving the passenger at the destination, would follow their internal process and International Air Transport Association guidelines for suspected communicable diseases. If there is someone unwell on board a flight, the pilot of the aircraft is legally required to inform air traffic control.

Arrangements will be made for medical assessments for the person on arrival. The exact arrangements will depend on the airport involved. The local Public Health Team would be alerted if there was a possibility that the individual was suffering from an infectious disease so that appropriate public health action could be initiated.

If you are working with patients that could have Ebola, you must ensure that you fully follow the latest guidelines in personal protective equipment and its correct disposal. Exact guidance is changing at the moment so we cannot give exact advice in this video.

Finally, since planning this video,  news on Ebola is changing and the WHO  are suggesting  the death rate will double every four weeks and other suggestions are that if serious action is not taken, there could be hundreds of thousands of cases within six months.

For more information on infection control training courses from ProTrainings Europe and local courses contact ProTrainings on support@protrainings.uk or call 01206 805359.