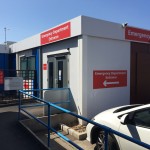 Warwick Medical School is leading the trial after concerns adrenaline, used to restart the heart, could cause brain damage and even death.

West Midlands Ambulance Service said the work could ultimately save “hundreds of patients”.

The trial, involving some 8,000 patients, will start in the autumn.

It will see ambulance staff in the West Midlands, London, Wales, and on the south coast and north-east of England inject roughly half of the the patients with adrenaline and the others with a salt solution placebo.

Patients, however, will not be able to give consent as they will be unconscious, prompting criticism from some experts.

One in four
Paramedics and other clinical staff will also be unaware which patients received the placebo.

West Midlands Ambulance Service medical director Dr Andy Carson said: “Although adrenaline has been used for many years in cardiac arrest management, there is growing evidence that it may result in poorer outcomes for patients, hence the trial.”

He said developments in technology suggested the drug “may cause more harm than good”.

The British Heart Foundation has also supported the study.