In this post, we asked our Paramedics, what should you do when you see blue flashing lights behind you?

So my advice would be doing not speed up, keep going until you can find somewhere safe to indicate and pull over to the left. Preferably not parallel to some bollards or where the road narrows or where there is oncoming traffic.

Another very dangerous one and this has caused fatal accidents in the past, has been where not the car immediately in front of the ambulance, but the car in front of that, sees the ambulance, takes action to pull over, but the car behind that car, between the ambulance and the car, does not see us and just swerves to pull out. Now, we are kind of trained to anticipate that, but sometimes it can happen right at the last second as we have planned our overtake and we have to take evasive action to miss the car. 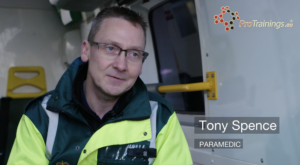 I think when you see a vehicle in the rear-view mirror there are a few things that we, as emergency drivers, would like to see. First, if you put your left-hand indicator on at least I know you have seen me. I have got to guess what you are going to do, and if you put your left-hand indicator on, I know just by that visual effect that you have seen me coming. The next thing is not to jam your breaks on, not to try and climb up into a ditch or make a really erratic action, but to pull to the left-hand side as close as you can. Keep going, do not accelerate, but do not slow down too much. We would far rather be travelling forward at 30 miles an hour than stuck behind a lamp post that we cannot get past.

So, the indicator on to the left, pull to the left-hand side, keep progressing forward until you can find a spot that is safe to pull over or to stop or to get off the road, preferably not opposite to central bollards and that sort of stuff because that is a really common occurrence and let us go past usually at normal speeds. These vehicles are very heavy, they are very difficult to control at speed, so we need to have a bit of pre-warning as to what is going on. So, yeah, just let us know that you know we are there. And also, when you are pulling over or if you are driving behind traffic, just keep an eye on your mirrors because cars behind you when you pull over quite often pull out to overtake you and that puts them directly in the line of us. So yeah, just be observant and let us know what you do.