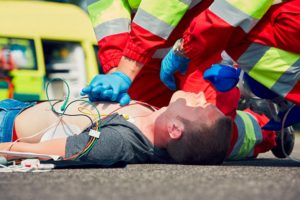 We want to highlight the amazing work done by the Resuscitation Council UK on its ‘CPR, AED’s and the Law’ document. Everybody should read it and thanks to the simple terms and great structure, it’s easy to understand so almost everybody can read it.

As it’s such a great source of into, we have extracted a few bits below and linked to the full version so you can read the rest. Full credit for this piece goes to the Resuscitation Council UK.

Why giving CPR and AED is vital to saving a life

The true annual number of deaths from sudden cardiac arrests (SCA) in the UK is currently unknown, but based on European data it is estimated to be around 60,000 per year. However, we do know for sure that in England the ambulance service attempts resuscitation in around 30,000 cases annually.

Unfortunately, at present, fewer than 1 person in 10 survives when the SCA occurs out of the hospital. We need more bystanders to start immediate cardiopulmonary resuscitation (CPR) in cases of SCA to improve survival.

CPR and the use of an automated external defibrillator (AED) can significantly increase survival chances in these circumstances if performed promptly. AEDs are often provided in public places and can be safely used by untrained members of the public while waiting for an ambulance.

The legalities around giving CPR and using an AED on somebody

The likelihood of causing harm by performing CPR or using an AED is very small indeed. Nevertheless, there has been some concern that should an attempt to resuscitate someone having a suspected SCA result in harm, a legal claim could be brought against the rescuer. To date, there has been no reported successful claim to this effect.

There are no statutory laws covering resuscitation but a potential liability could arise if a civil claim were brought by the victim, or their family, against someone on the grounds that intervention occurred without their consent and so constituted an assault and/or battery.

In professional medical practice, there are two defences available to healthcare professionals. They include ‘implied consent’ (the assumption that if someone were conscious and able to make a decision, they would consent to the procedure) and ‘necessity’ (that the treatment is given in the best interests of the patient). While the defence of implied consent may not be as clear-cut if the rescuer isn’t medically qualified, the defence of necessity may be available, provided the rescuer acts reasonably in the circumstances. For instance, it would be reasonable to carry out CPR and use an AED if no healthcare professionals were available.

Section 5 of the Mental Capacity Act (England and Wales) 2005, which applies to people aged 16 and over, may also add weight to this defence. It suggests that if a passer-by goes to help someone believed to be having a cardiac arrest, they are not committing battery if they reasonably believe the person they are trying to help isn’t mentally capable of giving consent for CPR and use of an AED, and that they believe it would be in the person’s best interests to try to resuscitate them.

What the consequences may be

A claim for negligence could be brought if it could be shown that a duty of care had been breached, leading to harm. In the UK, there is no legal obligation for others to help a person in need of resuscitation, provided they were not the cause of the person needing help. However, there are circumstances in which certain professionals, and people who have a particular relationship with the collapsed person, would be considered to have a duty of care. Also, once a bystander volunteers to help, they are then considered to have a duty of care to assist the person as far as they are able.

Anyone who attempts resuscitation would only be legally liable if it could be shown that the intervention had left a person in a worse position than they would have been in had no action been taken. In the case of a cardiac arrest, this would be virtually impossible, since without intervention death is inevitable. Added to that, an AED will only send shocks if it detects a pattern consistent with a cardiac arrest.

Someone could potentially be left worse off if CPR were carried out inappropriately, but this is highly unlikely. In this case, it would have to be shown that the standard of care was to blame and this would be judged according to the rescuer’s training level.

Third parties, such as first aid trainers, or organisations that provide training, maintain resuscitation equipment or administer the system under which rescuers operate, could also be potentially held liable. However, a claim would only be successful if the training were below standard, or equipment had not been correctly maintained, leading directly to harm.

There is no UK legislation stipulating that AEDs must be provided in public areas, so not providing them could not result in a claim under statutory law. However, since their introduction, the use of AEDs by laypeople has been widely recommended in international resuscitation guidelines. This has given rise to the concern that failing to provide an AED might lead to a claim for negligence under common law if a member of the public were to suffer a cardiac arrest on the premises. Each organisation should, therefore, consider assessing the pros and cons of AED provision.

The Resuscitation Council UK has published a full document with the aim of this clarifying ‘the obligations and responsibilities of those who attempt the resuscitation of anyone suffering a suspected sudden cardiac arrest.’ It also provides ‘guidance for organisations that are contemplating providing life-saving equipment and training for those who might use it.’

The advice is concerned primarily with resuscitation attempts made out of hospitals or other healthcare facilities and, while relevant to healthcare professionals, is particularly aimed at lay rescuers with modest or no first aid knowledge or training.

This document was originally published in 2000 as ‘The legal status of those who attempt resuscitation’ and was first revised in 2010. A thorough review was undertaken in 2017 by one of the original authors and a legal specialist in the field. Revisions have been incorporated to ensure that the advice remains as current and accurate as possible.

Thanks again to the Resuscitation Council UK for this content.