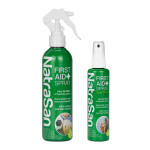 NatraSan is a new first aid spray that is a good addition to any first aid kit.  There are lots of different first aid sprays on the market but this one is a bit different as is a first aid spray containing pure Hypochlorous Acid which is a mild but incredibly effective acidic substance released by our white blood cells to kill invading pathogens, such as bacteria and viruses.

NatraSan effectively kills 99.9999% of harmful germs, including bacteria, viruses, fungi, yeasts and moulds. It is completely safe to humans, animals and the environment and as a result can be used to treat insect stings, cuts and wounds, athlete’s foot and as a disinfectant around the house – you can even use it to neutralise bad odours, such as foot and shoe odours.

We all see so many products advertised which claim they kill 99.9% of bacteria. This sounds good, but actually this is not enough to get close to passing the very strict European Standards EN Test. It also means that in suitable conditions of warmth the remaining bacteria can grow back to the original burden in as little as two hours.

So, for example, if you have one million bacteria you’re left with 1000 bacteria alive after using a 99.9% treatment. But if you were to use NatraSan on the same amount of bacteria you’d be left with just 0-1 still alive.

This spray is ideal for humans and animals and can be used on:

NatraSan is safe to use around the eyes and mouth, pH Neutral, so will not sting and kind on your skin.

NatraSan is available in two sizes, a handy 100ml spray bottle and a larger 250ml trigger spray pack and you can buy it from ITG Supplies or ProTrainings or direct by clicking here.