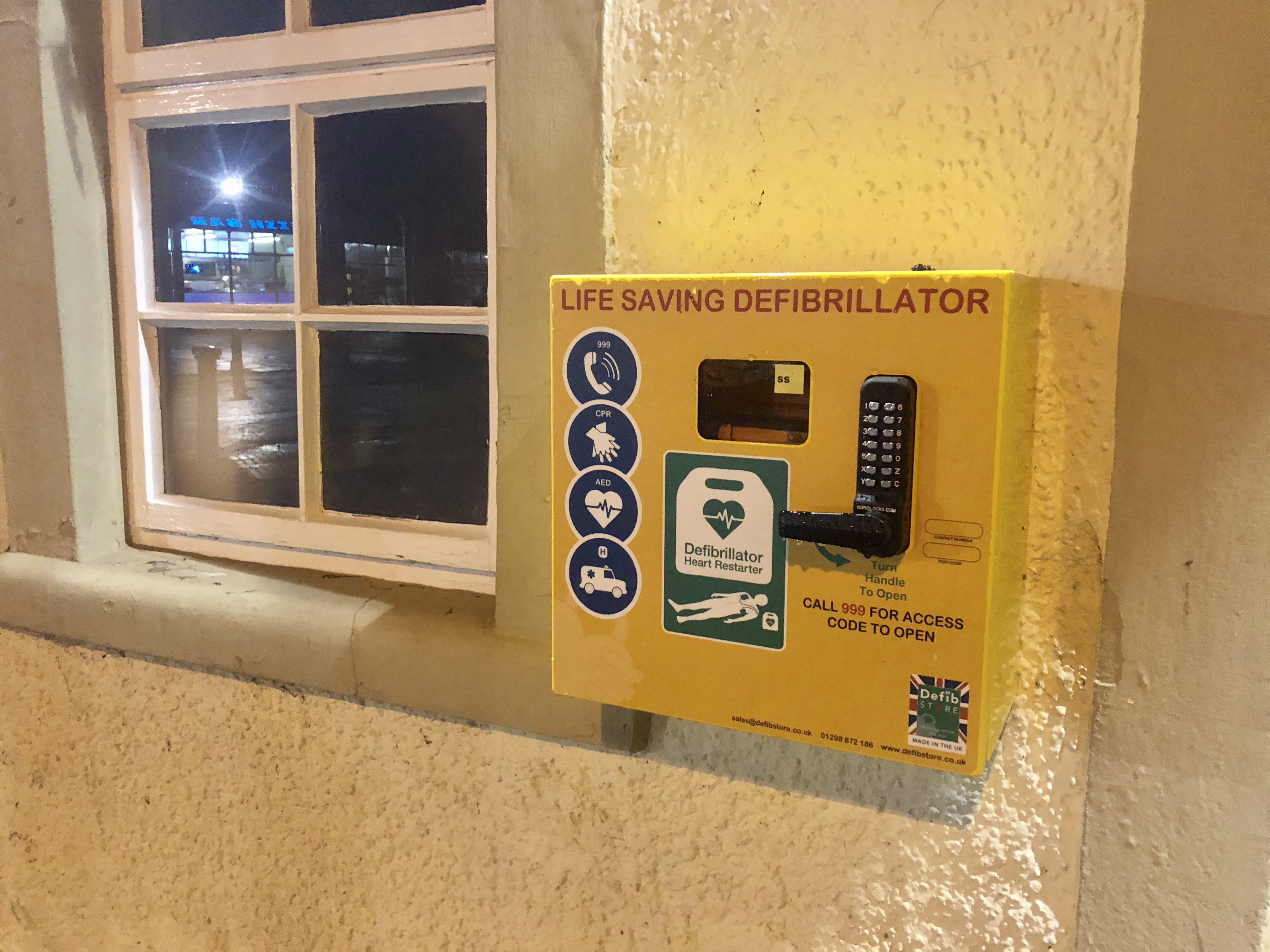 We love to celebrate the great work that our instructors and resellers are doing out in the community! We found out about this great story and had to share it with you below.

Abacus Training Centre Ltd. has helped a small town to add three community defibrillators to its streets. Owner, Duncan Parsonage, had starred in many of our first aid videos!

Rocester’s residents are counting their blessings thanks to three brand new defibrillators that have been installed in their home town, after Abacus Training subsidised the life-saving equipment to reward their fundraising efforts.

The local first aid training and supplies company stepped in to offer its support to a local resident who has been raising funds to install community defibrillators in the town, after Director, Duncan Parsonage, read about his heroic ordeal in the newspaper.

Former Royal Marine Colin Wood, had been fundraising to buy vital defibrillators after he saved his 41-year-old partner’s life following her sudden cardiac arrest. Medical training Colin had received during his service in the Royal Marines medical squadron kicked in and he was able to give CPR, which kept Sue alive for 20 minutes before the ambulance arrived.

Since then, Colin had been on a mission to raise enough money to equip the village with several AED units. The charitable bug swept through the community with a local pub serving special cocktails in aid of the cause, and Colin getting his bodily hair waxed whilst being cheered on by eager sponsors!

Raising just over £4,000, Colin would usually have fallen short of being able to afford the three defibrillators and added equip- ment that he was hoping to purchase for the town. However, Abacus Training came to his aid, offering to subsidise the equipment and save the community over £2,000.

Colin said, “This deal has enabled Rocester’s residents to be safe by providing total coverage of the main village. After my family’s experience, I vowed that I’d do my bit to improve the chances of survival for anybody else that suffers from cardiac arrest in this area.

“The support from Abacus Training has been outstanding and Duncan’s contribution has allowed us to do more with the donations than we could have done without the company’s assistance.”

Duncan Parsonage, Director of the local business said, “I was moved by Colin’s story and as a campaigner for community defibrillators I thought it was only right that Abacus Training made this contribution to the area.

“We were already very familiar with Rocester, with my company providing defibrillators and first aid training to a large construction manufacturer just across the way from where we’ve installed these new units.

“These defibs are the best in the best in the business. They’re easy to use, cheap to maintain and will be secured in boxes, so they’re safe from theft and the elements. I hope they never have to be used, but what Colin has done for the community is something that will certainly be appreciated if they are ever needed. They really are life-savers.”

Before starting his own business in first aid training, Duncan was a paramedic with West Midlands Ambulance Service for over 20 years. During his tenure, he pioneered the Community First Responder (CFR) scheme which is still active in the Rocester area to this day. Duncan also helped to install the UK’s first community defibrillators and is now harnessing his life-saving ambitions to help busi- nesses transform their ability to respond to emergencies like cardiac arrests.

Around 100,000 people are believed to die from sudden cardiac arrest every year in the UK. The chances of survival when using a defibrillator alongside CPR increase from 9 to 50 per cent.