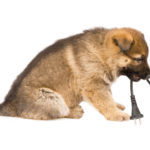 An electric shock is referred to as electrocution and it can be seen in all ages but it is more common in younger puppies as they have a habit of chewing through cables.  Electrocution can also occur anywhere there is a supply of electricity that could come into contact with the body.  Common areas pets are electrocuted from include: power cords, garden extension leads and power tools.

The effect on the body will depend on the current, voltage and time exposed.  For example, a shock from a high voltage, short duration but low current source like an electric fence will give a shock but will not cause any harm and a lower voltage but higher current mains shock can be fatal.

Static shocks can be a problem and hurt animals but generally, they do not cause any long-term harm.

An example of a shock that is usually always fatal is a lightning strike.

With modern earth leak trip switches, electric safety has improved but there is still a real risk to animals and humans.

Signs of electrocution include burns which are not always easy to find and there is usually an entry and exit wound. Pain in the mouth is common as they chew through cables.  You may detect a smell of burning as hair and tissue, have been damaged. Initially, you may see twitching and muscular convulsions and you may detect an abnormal heart rhythm.  The extent of these signs will depend on the shock received.

While the shock is being delivered, your safety is the most important thing and you must not touch them or items near them.  They may be showing signs of convulsions which look like they are having a seizure.

Isolate the power supply to remove the hazard and then carefully approach.  Once safe, check for breathing and deliver CPR if needed.  Look for signs of burns and other injuries and treat accordingly.  Continue to always monitor breathing in case it stops at a later time.

Some signs will not show for a number of days as damaged tissues die and form ulcers. These ulcers can easily get infected and if in the mouth, they will be in pain and there will be a foul smell.

Electrocution can damage the lungs and cause fluid to build up in the lungs.  This will make breathing difficult and it is called Pulmonary Oedema and it is life-threatening.  Pulmonary Oedema can occur within minutes of the shock or up to two days later to develop.

You will usually know from the surroundings that an animal has been electrocuted but with mild shocks, you may not realise it for a day or so when they show signs of pain or secondary infection of burns.

Urgent treatment from a vet is very important due to the number of serious complications that could arise. Vets will complete a full examination including ECG reports on their heart and it is common for them to admit them for continued monitoring.  Blood tests are also carried out to monitor blood oxygen levels.

The long-term recovery will depend on the damage done but it is usual for continued vet care to be needed over a period of time.

Prevention is the most important thing you can do.  Protect cables or restrict access to high-risk areas especially with puppies. Avoid playing with dogs where there are cables in the garden.  You could use bitter tasting sprays on cables to stop them putting them in their mouth.

Spend time looking at where cables are and try to hide them behind cupboards and furniture.