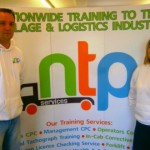 I was working at Truckfest Peterborough 2012, this was the first day of the show and at approx. 8:15-8:30 most of the team were inside our marquee preparing the stand, whilst Kelly and I were outside attaching balloons to the exterior of the marquee.  Kelly entered the marquee to collect something and I went in almost straight after and said a man had collapsed on the floor, I immediately got my first aid kit and ran over to the collapsed man. Kelly and her college (Daryl Moore) followed me over to the man. Upon approach at the scene I immediately started asking witnesses if anyone had called 999, I had a reply from a man who said he was currently speaking with the emergency services, this man’s name was Adam and he was a friend of the collapsed man. I started checking the collapsed man over, I found out from Adam that his name was Paul.

I instantly noticed that Paul had blood on his tongue and that he was Agonal gasping so I immediately started doing compression only CPR. Kelly knelt down to tilt Paul’s head back and open his airway and Daryl checked his pulse. Whilst I was giving CPR to Paul , I was explaining to Adam what was happening so that he could give accurate information to the emergency operator however, the operator could not understand what Adam was trying to explain to them so he passed the phone over to me and Kelly took over to give Paul chest compression CPR and again Daryl checked for a pulse.

The man immediately started to give mouth to mouth and I moved back. I passed the phone to Kelly so she could carry on speaking with the emergency operator and I took over again giving compression only CPR. The man continued to give mouth to mouth and Kelly was telling him to stop as the emergency operator said not to give him any air. From what I witnessed the man gave Paul 2 rescue breaths and 1 cycle of CPR. I asked someone to get some scissors so I could cut his shirt off, the man (I think) lifted this t-shirt away from his body and I think Adam (Paul’s friend and college) cut his shirt off.  While this was happening Calvin (Another team member) was blocking the path of people so they could not come near the scene, Pauls colleges were using coats to stop people seeing what was going off, somebody then got a blue sheet to hold round so nobody could see. There was approx. 10-15 people around the scene.

The onsite paramedics arrived and shortly after the Ambulance arrived. The onsite paramedics took over with the Defibrillator and I kept talking to Paul as he noticed that the paramedics were not speaking to him as they were just getting on with what they were doing. I then started to ask Adam if Paul had any medical problems or allergies that he knew of and Kelly asked some other people who were there also if they knew if Paul had any medical conditions.

From the paramedics arriving I stayed close to Adam as he was the person who saw Paul collapse and witnessed the whole incident and I wanted to ensure he was ok and was able to give the correct information to the emergency services. I saw a young child stood looking at the incident and I took the young child back over to his granddad. I looked around at colleagues and friends of Paul’s and other people that were at the incident for any signs of shock.  Once Paul had been taken in the ambulance I packed up my First Aid Kit up and Kelly and I went to the control room and reported what involvement we had during the incident. We left our contact details with event control.

Over the course of the event (Weekend 6th and 7th May 2012) Paul’s colleagues kept us informed of his condition. Other exhibitors also stopped us to find out how Paul was and congratulated us for saving his life. We had news from the hospital that was given to us by many of Paul’s colleges; they said the hospital had said that if Kelly and I hadn’t been there and done what we did that he wouldn’t have been alive and that we saved his life. Since Truckfest Peterborough, NTP have been in contact with Paul’s company on a regular basis to see how Paul is. The last we heard he was out of hospital and back working. Compression only CPR was carried out as Paul was bleeding in and around the mouth.

We are fully aware of the protocols of CPR. The first aid kit did have a full face mask but once I had had opened my first aid box and checked the casualty, the box had been knocked over and the face mask couldn’t been found. As the paramedic (Dave) said “welcome to resus where everything flies everywhere”  Kelly, the stranger and myself are being put forward for a commendation for our efforts.

Kelly Moore and Daryl Moore were trained by myself and Graham Frost and they both hold Protrainings EFAW certificates.