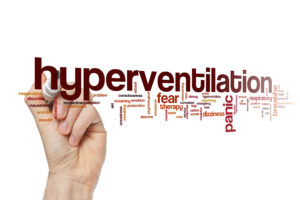 If excess ventilation cannot be compensated metabolically, it will lead to a rise in blood PH. This rise in blood pH is known as respiratory alkalosis. When hyperventilation leads to respiratory alkalosis, it may cause a number of physical symptoms: dizziness, tingling in the lips, agitation, confusion, feeling they cannot breathe, headache, weakness, fainting and seizures. In extreme cases, it can cause spasms flapping and contraction of the hands and feet and is sometimes referred to as claw hands.

Swimmers sometimes voluntarily hyperventilate in the hope of extending dive time or extending the length of time they can swim underwater without rising to take a breath, though this puts them at risk for shallow water blackout as they rise to the surface. Anesthesiologists sometimes recommend that their patients hyperventilate prior to putting them under general anaesthesia. Certain kinds of yoga also employ voluntary hyperventilation.

Involuntary hyperventilation can occur in response to both physical and emotional stimuli. These include reduced air pressure at high altitudes, raised progesterone levels in pregnancy, head injury, stroke, respiratory disorders such as asthma and pneumonia, cardiovascular problems such as pulmonary embolisms, anaemia, adverse reactions to certain drugs, physical or emotional stress, fear, pain and anxiety. Hyperventilation can also be mechanically produced in people on respirators.

The first step that should be taken is to treat the underlying cause.  Anxiety can cause hyperventilation, producing symptoms that are interpreted as indicating serious physical illness. This causes more hyperventilation, worse symptoms and a vicious circle.

Breathing into a paper bag has been used in the past as the initial treatment as it can be used to help build up the carbon dioxide levels but this should only be used where the diagnosis is certain as it may be dangerous if there is a physical disease.

Relaxation techniques and breathing exercises may be helpful for people who hyperventilate often and if you are dealing with a patient, try to get them to control their breathing and focus on you to help reset their breathing pattern.

In most cases, you do not have to call Emergency Services but it would be worth referring them to their doctor to treat the underlying cause.